The author of The Scarlet Letter 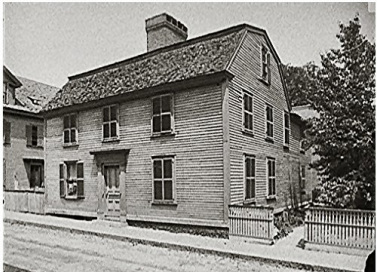 Hawthorne's father died when Hawthorne was four. After that, Hawthorne and his two sisters moved in which his mother's family in Salem, with whom they lived for ten years. Hawthorne did not want to attend college, but his uncle insisted and paid for it. Hawthorne attended Bowdoin College, where became a friend of future U.S. President Franklin Pierce. . About his time at College he wrote:

"I was educated (as the phrase is) at Bowdoin College. I was an idle student, negligent of college rules and the Procrustean details of academic life, rather choosing to nurse my own fancies than to dig into Greek roots and be numbered among the learned Thebans." 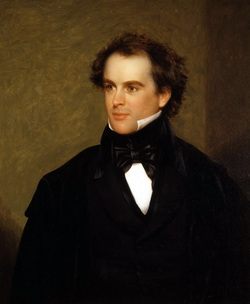 Hawthorne in 1840
In 1821, Hawthorne graduated Phi Beta Kappa. A few years later, he published his first novel, Fanshawe, which he later tried to suppress because he didn't think it was very good.

Hawthorne engaged in flirtations with a number of women, including Elizabeth Peabody. Ultimately, Hawthorne settled his affections on Elizabeth's sister, Sophia Peabody. In order to save enough money to marry Sophia, Hawthorne lived in transcendentalist Utopian community at Brook Farm for a year. He saved enough money there, and he and Sophia where married in 1842.

Like her husband, Sophia was almost pathologically shy. She was an illustrator and a painter. Sophia suffered from chronic migraines that left her frequently bed-ridden, but they seemed to abate when she married Hawthorne. They enjoyed a love-filled and long marriage. About Sophia, Hawthorne wrote that she "is, in the strictest sense, my sole companion; and I need no other—there is no vacancy in my mind, any more than in my heart... Thank God that I suffice for her boundless heart!" Sophia was an admirer of her husband's writing and supported him. 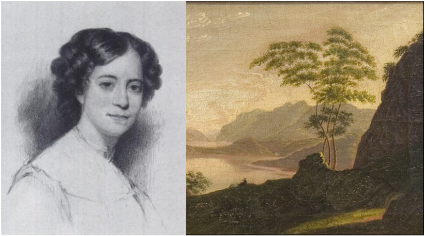 An etching of Sophia and pat of one of Sophia's paintings.
The Hawthorne's had three children. The first was a daughter named Una after "The Fairy Queene," much to the displeasure of Hawthorne's extended family. Their child child was a son, Julian, about whom Hawthrone wrote to his sister:  "A small troglodyte made his appearance here at ten minutes to six o'clock this morning, who claimed to be your nephew." Their final child was another girl, named Rose.

Hawthorne was surveyor of customs in the port of Salem from 1846 to 1849.Hawthorne worked at the Custom's House in Salem, but lost his job when the power in the White House changed. Although this impacted him financially, it gave Hawthorne more time to write and in 1851, he published The Scarlet Letter. 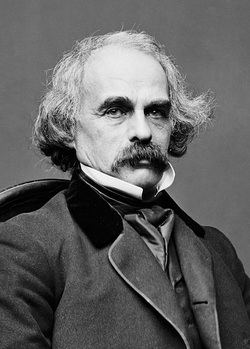 Hawthorne, 1860s
The Hawthorne's moved around Massachusetts some, but ultimately ended up settling in a house in Concord in 1852, called "The Wayside" by the previous owners, the Alcotts. Their neighbors in Concord included Emerson and Thoreau, but generally the Hawthorne's were far too shy to socialize with them.  That year, Hawthorne also wrote the official campaign biography for Pierce. In 1853, President Pierce appointed Hawthorne to a four-year term as United States consul in Liverpool, England. Hawthorne traveled to England with his family, they then went to Italy and after that returned to Concord in 1860.

As the Civil War started, Hawthorne took a trip to Washington D.C. and met President Lincoln. He later wrote about it in "Chiefly About War Matters." Shortly after that, Hawthorne fell ill, complaining of pain in his stomach. In order to distract himself, he want on a trip to New Hampshire with Pierce. Hawthorne died during the night on this trip, in 1864.